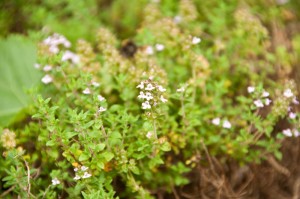 Thymus Vulgaris. (There are many varieties)

It is pungent, slightly bitter, warm and drying. Thyme leaves can be used fresh or dried to add wonderful flavour to many recipes. Combine thyme with other herbs and make a bouquet garni, (herbs tied together and added to soups and stews). Thyme is a great favourite in French cuisine and blends beautifully with garlic. Use lemon and orange thyme leaves and add to olive oil, it makes a superb marinade. Add thyme to cheeses and try orange thyme in honey which makes a wonderful spread. Try to use as many different thyme varieties as you can, for their vast flavours. It is similar in properties to and works well with rosemary. It is often used in Creole and Cajun cooking. Lemon Thyme has a more delicate flavour and complements fish and chicken dishes.

Antiseptic, expectorant, anti-microbial, soothes coughs and chest infections (especially deep seated with thick yellow phlegm). It is a digestive tonic, warming the middle.  It is antispasmodic; helps stomach chills, gastroenteritis and diarrhoea. It also helps to heals wounds. Thyme can be used as an infusion to treat coughs, colds and chest infections. In syrup form it is soothing for sore throats as thyme is an antiseptic, antibacterial and antifungal herb. The essential oil can be used as a rub for chest infections, or as massage oil for aching joints of rheumatic pain. Thyme is also used to treat athlete’s foot.

The name Thyme comes from the Greek “thymos” meaning spirit or smoke. Properties attributed to thyme by the Greeks included the giving of strength and courage. The early Egyptians also used thyme in mummification. Thyme was a very popular herb during the days of the ancient Greeks and Romans. Greeks used it for massage and in bath oils, as incense, and for medicinal purposes. The Greeks often used the phrase “To smell of Thyme” as praise. Later, in the Middle Ages, Knights would have a sprig of Thyme embroidered on their scarves by their lady as a sign of their bravery.

In mythical folklore, Thyme flowers were full of perfume and nectar for the bees, traditionally the messengers of the fairy world. Thyme honey is very popular on the island of Crete. Ancient Greeks believed Thyme could restore physical vigour and relieve melancholy. Thyme was used in ritual altar fires, to purify the sacrifices to the gods. Thyme was also burned as incense at funerals and placed in the coffin of the dead. It was believed that the soul of the deceased took up residence in the flowers of the Thyme plant, and that Thyme assured the passage of the deceased into the afterlife.

Thyme is bound to Venus and Air.  As with many herbs, it can be burned as a purifier, and inhaling the burning scent is thought to enhance psychic powers and renew energy.  Burn it in the home to banish evil and to purify the home or a specific room.

When carried on the person, Thyme is thought to inspire courage, attract good health, and protect from negativity, such as at funerals or other sad or unpleasant occasions. Carry a sprig in your pocket or make a sachet.

Thyme can also be added to the bath for purifying and mental clarity.  Put a handful in cheesecloth and hang it from the faucet while the bath water is running. Fresh sprigs can be placed in a pillow to promote sleep and prevent nightmares. It helps to stimulate warmth in the Solar Plexus and this in turn opens up rhythmic activity in the lungs and heart to calm and to help gather strength.

A recipe for a magical oil allegedly enabling one to see fairies, was found in the Ashmolean Museum in Oxford. The recipe states that “The thyme must be garnered near the side of a hill where fairies used to be.”  It assists when chanting. Thyme is used in Healing Rituals and in Spells for protection and curse removal. It is said women who wear or carry Thyme are irresistible to men, and carrying sprigs in your pocket aids in developing your psychic abilities especially clairvoyance and clairaudience. Burn some Thyme to help boost your courage and confidence when facing challenging situations. It is said to strengthen the will, give courage and promote confidence.

I came across a very interesting article regarding Thyme and the European Commission written by a lawyer. I include it here:

“For the European Commission however, herbs are a weighty and important issue which need legal regulation. Take for instance the ancient herb known as Thyme. This is an ancient plant native to the Mediterranean area. The Greeks used it as incense. The ancient Egyptians used it in the embalming process. Through the centuries it acquired the mythical status as a plant that inspired courage, and in the middle ages a representation of the thyme plant came to signify bravery. It is believed that the plant was first brought to England by the Romans, over two thousand years ago.

Its value is not only as an ingredient in cooking. It has long been recognised that it has effective medicinal properties; it is antiseptic and anti-fungal. Thyme is also rich in minerals and vitamins. Because of these characteristics thyme has a long history of use in natural medicine, particularly for chest and respiratory problems.

Despite this impressive lineage as a herbal remedy over several thousand years, thyme, along with many other remedies, has been made subject to strict laws concerning its use and sale. As a result of the EU Directive on Traditional Herbal Medicinal Products, all herbal medicines, subject to limited exceptions, need to be licensed and cannot be sold without first receiving official approval. The process for obtaining this approval is complex and expensive, but simply put, the Commission, if satisfied on the basis of thorough scientific investigations of its efficacy and safety may approve a particular herbal remedy.

In the case of thyme, the European Commission, after lengthy investigations, issued a formal Decision that thyme can be included in the list of herbal substances for use in traditional herbal medicine. One extraordinary aspect of this investigation process is the sheer volume of paperwork and scientific data and testing that was involved in coming to a conclusion which many would say was patently obvious from the start. For instance one of the matters considered in the scientific data was the level of risk associated with an overdose, and the report noted, (seriously), that there were no reports of an overdose of thyme!

The list of plants governed by these regulations is very extensive and include; rosemary, sage, garlic, green tea, rhubarb and nettles. (The scientific report on nettles, discovered that they can sting you!) In fairness to the EU, public health is a serious issue and the Directive is aimed at all herbal medicines, not just thyme. Some herbs can be extremely toxic, and there is a benefit to the public to have all medicines tested before being released to the public. On the other hand many of these herbs have been used for thousands of years without mishap, a fact which lends some credibility to opponents of the law who believe that the resources of the EU are wasted on unnecessary bureaucratic regulation of every aspect of our lives. Others see a darker picture, the hand of the pharmaceutical industry at work to close down a rapidly expanding market which is seen as a threat to their monopoly. One of the reasons for these regulations is to prevent false claims being made for the medicinal benefits of these products. The product should do what it says on the tin. While this is fine in theory, you have to remember that this is the same EU which decided last year that a bottled water supplier could not make a claim that drinking water can prevent dehydration. This hardly inspires confidence in the process.”