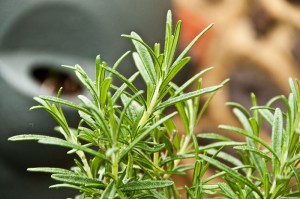 Few herbs are as universally grown and loved as Rosemary. The bruised leaves have a resinous, pine like scent and a strong taste that can overwhelm. It complements other strong tastes like wine and garlic, starchy foods and rich fatty meats such as lamb, pork, duck and game. It flavours oils and vinegar when steeped in them. It is very popular in Italian cooking.

It is a restorative tonic for the nervous system, for exhaustion and for general weakness and depression. It makes a wonderful hair tonic having a reputation for stimulating hair growth, for combating dandruff and for helping a greasy scalp. It can be taken as an infusion but the essential oil is more commonly used. It has anti-inflammatory and antioxidant properties, enhancing memory and concentration and possibly helping to prevent dementia. Applied externally the oil relieves muscle cramps and arthritis. As a traditional digestive remedy it relieves stomach cramps, bloating and gas and may ease liverish symptoms such as headaches and poor digestion of fats. The bitter substances in rosemary stimulate bile , aiding the digestion of dietary fat and lowering cholesterol. In European folk medicine rosemary baths were used to prevent bacterial infection with eczema. These baths also stimulate blood circulation and this can help with rheumatism, low blood pressure, varicose veins, bruises and strains. Never ingest the essential oil.

In the 13th century it is thought that a hermit gave the recipe called Hungary Water to Queen Isabella of Hungary, whose legs were so crippled with rheumatism. Daily bathing restored her legs and also her youthful beauty. To make your own, infuse flowering rosemary tops, myrtle, lavender, (thyme, sage, mint, and marjoram can also be added) in alcohol for 2 weeks before filtering.

Rosemary is bound to Sun and Fire.  It’s presence on the body is said to aid in memory and learning.  Try putting a sprig in your pocket before an examination, meeting, or other situation where mental clarity is important. Rosemary was associated with love, friendship, and remembrance in medieval times. It was used in weddings as a symbol of love, and was tossed into graves to signify that the deceased would be remembered.  Try burning it as incense for these purposes.  In many parts of the world it is a symbol of friendship and remembrance and for this reason is often incorporated into funeral wreaths and wedding bouquets.

Rosemary is also thought to be a protective herb.  It can be made into a protection wreath, and can be placed above the door or under the bed for protection from evil.  Try it in a dream pillow or put it in a pillowcase to protect and ward off bad dreams.

As a cleansing and purifying agent in magic, Rosemary is one of the more important herbs.  It can be used in herbal baths – place it in cheesecloth or a coffee filter tied with string and place it under the running bath water. If time is a factor, use it to wash the hands instead of the ritual bath in advance of performing rituals.

Rosemary has a strong association with the Virgin Mary. It is said that when the Holy Family were fleeing from Herod’s soldiers, Mary spread her blue cloak over a white flowering rosemary bush to dry. When she removed her cloak the flowers had turned blue in her honour.

It was also associated with ancient magical lore and was often hung around the home to keep thieves and witches out and to prevent fairies from stealing infant children. It connects the heart and root chakras. Arians work well with Rosemary.