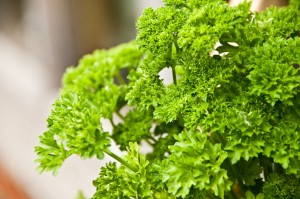 Parsley is widely used in Middle Eastern, European, and American cooking. Curly leaf Parsley is often used as a garnish. In central and eastern Europe and in western Asia, many dishes are served with fresh green chopped Parsley sprinkled on top. Green Parsley is often used as a garnish on potato dishes (boiled or mashed potatoes), on rice dishes (risotto or pilaf), on fish, fried chicken, lamb or goose, steaks, meat or vegetable stews (like beef bourguignon, goulash or chicken paprikash.) In southern and central Europe, Parsley is part of bouquet garni, a bundle of fresh herbs used as an ingredient in stocks, soups, and sauces. Freshly chopped green Parsley is used as a topping for soups like chicken soup, green salads, on open sandwiches with cold cuts or pâtés. Parsley is a key ingredient in several Middle Eastern salads such as tabbouleh. Persillade is a mixture of chopped garlic and chopped Parsley used in French cuisine. Gremolata is a traditional accompaniment to the Italian veal stew, ossobuco alla Milanese. It is a mixture of Parsley, garlic, and lemon zest. Root Parsley is very common in central and eastern European cuisines, where it is used as a ingredient in many soups and in meat or vegetable stews and casseroles.

Ounce for ounce, Parsley contains more essential vitamins than any other herb. It contains more vitamin C than an orange by volume. It contains vitamins A, B, calcium and iron. Chinese and German herbologists recommend Parsley as an aid to lowering high blood pressure. Parsley tea is used as an enema. Cherokee Indians used Parsley to strengthen the bladder. Parsley is used to stimulate the pelvic and uterine area, and to bring on menstruation. If crushed and rubbed on the skin, Parsley helps relieve the itching of mosquito bites. There are health risks in the use of Parsley as a medicinal herb. It should never be consumed as a medicine by pregnant women. Used as an oil, leaf, seed or root, it can lead to uterine stimulation and premature birth. Parsley is high in oxalic acid, which can lead to the formation of kidney stones. Parsley in oil form contains furanocoumarins and psoralens which can lead to extreme photosensitivity if used orally. It has been used medicinally for a variety of illnesses particularly gravel bladder and kidney stones and other disorders of the urinary system.

Early herbalists wrote that the use of Parsley would “fasten loose teeth, brighten dim eyes and relieve a stitch in the side.” Today modern science tells us that Parsley is extremely rich in vitamins A and C. Night blindness is relieved by vitamin A and the health and vigour of the gums depends on vitamin C, so early herbalists were on the right track even before they knew of the existence of vitamins. Its iron content far surpasses that of spinach. This herb also contains more calcium and phosphorus than most vegetables. It is also a good source of manganese, potassium and vitamin B1. It is believed that many of us are deficient in Vitamin A which can be a cause of hernias. So it would be a good idea to eat the garnish on your plate. Parsley also contains sugar, mucilage, starch, volatile oil and apiol. The herb is classified as a diuretic and can act as a solvent for uric acid.

Parsley is the most mentioned herb in the world. The Greeks thought that Parsley was the blood of their hero Archemorus and would crown winners of major sporting events with wreaths of it. The Romans used Parsley for a garnish and flavouring. They would place Parsley on their tables and hang it around their necks to ward off fumes. Medieval Europeans believed that you could kill someone by plucking a sprig and invoking that person’s name at the same time. It came to America in the 17th century, and is widely spread today. It is used mostly as a culinary herb. Parsley is hard to process, because it takes 12 pounds of fresh Parsley to make one pound of dried. People still tend to use the dried herb instead of fresh.

The ancient Greeks believed that Parsley had a special relation to the honoured dead as the herb was said to spring up from the blood of slain heroes. When someone died, persons of prominence would have games to commemorate their memory. Garlands of Parsley were presented to the victors. Because of this association, the plant was regarded as something ominous and foreboding. Roman charioteers placed the herb on their banquet tables and included it in the feeds of their horses to make them swift footed and strong. The name Parsley derives from two Greek words petros and selinon- from which the Latin petroselinum was derived. This became corrupted by degrees into petersilie, perceley, persil and finally Parsley. The ancients believed that Parsley had the power of absorbing the inebriating fumes of wine and thereby prevent intoxication.

By the Middle Ages, Parsley was given medicinal credit for curing a number of ailments.

Parsley has been medically recognized as a diuretic, emmenagogue, carminative, expectorant, nervine, tonic, and a remedy for a plethora of health issues. Parsley has been used to assist in the healing of asthma, dropsy, arthritis, jaundice, chest and heart pain, and has even been thought to cure head lice. It assists the function of the bladder, kidney, liver, lungs, stomach and thyroid. It is also a great treatment for bed-wetting, gas, fluid retention, high blood pressure, indigestion, kidney disease, obesity and prostate disorders.

Vitamins are an essential aspect of our health and Parsley is a course in vitamin therapy all by itself. It contains vitamin A, several B vitamins, calcium, iron and vitamin C. For overall health benefits drink fresh Parsley juice, two ounces at a time, twice a day.

The plant has a long association with the devil. It is traditionally unlucky if given as a gift. Native American Indians make a love potion that includes wild Parsley. If you use powdered Parsley on your head you will not go bald. In meditation, invoke Aphrodite or Venus. In a bath, Parsley brings one into an affinity with your yin or feminine side. It is primarily used in rites of the dead and for purification. Librans have an affinity with it.