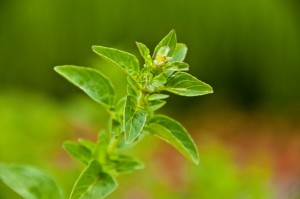 Lemon Balm smells like sweet lemons and goes with most foods complemented by a lemon flavor. Use in teas, salads, cordials, fruit dishes, chilled summer drinks and with chicken and fish. Chopped lemon balm can season sausage or fillings, and can also be added to semi-soft butter, to be spread over bread. Lemon balm vinaigrette and lemon balm oil can be made by soaking the whole plant in vinegar or olive oil.

Lemon Balm’s mild sedative and mood enhancing effects are commonly used to treat sleep disorders, restlessness, anxiety and depression. It can also help with gastrointestinal problems such as flatulence, spasm and nausea, especially when associated with anxiety such as in cases of Irritable Bowel Syndrome. Scientific studies show it has antiviral properties and topical preparations help relieve the symptoms of cold sores, caused by the herpes virus. It has been used for hysteria, melancholia, headaches and high blood pressure. The tea can also induce perspiration and relieve fever due to colds and flu.

Externally lemon balm has been used for rheumatism, nerve pains, as an insect repellent and for a stiff neck. Homeopathically it is used for menstrual difficulties. It is gentle enough for babies and children.

In one study it was used on patients with mild to moderate Alzheimer’s, who showed improved cognitive function after sixteen weeks of treatment. Fresh lemon balm contains a wealth of compounds and nutritional chemicals, including potassium, calcium, magnesium, iron, zinc, manganese, strontium, selenium, and vitamin C. The main components of the essential oil are citral, citronellal, linalool, and geraniol. Lemon balm is high in flavonoids, which can have an antioxidant effect. It also contains tannins, which are astringent and contribute to lemon balm’s antiviral effects, and eugenol acetate, which is believed to be one of the phytochemicals responsible for lemon balm’s reported antispasmodic effects.

Lemon Balm’s association with bees goes back to ancient times. According to Greek mythology, Melissa was one of the nymphs who hid Zeus from his father Cronus, feeding him milk and honey. Once Zeus was in charge of Olympus he changed her into a Queen Bee. Bearing the genus name “Melissa”, meaning “bee” in Greek, the plant was likely named for its reputed ability to attract bees. In Roman mythology, when the mother of young Cupid – Venus – was absent, bees would nurse him with nectar made from the flowers of lemon balm. Romans therefore called it the “elixir of life”. In Greek mythology lemon balm is the incarnation of Artemis, the Hellenic goddess of the hunt and of the moon (applying as well to her Roman equivalent, Diana).

In Europe, when sugar had not yet become ubiquitous, lemon balm was heavily relied on as a source of sweetness. Around 77 AD, Greek physician Dioscorides wrote in his book Materia Medica that bees are very fond of this aromatic plant, and first century Roman naturalist, Pliny the Elder, wrote that lemon balm planted near bee hives would encourage bees to return.

Early herbalists and writers praised lemon balm for its medicinal and uplifting qualities. Eleventh century Persian physician and philosopher Avicenna was an early advocate for the use of lemon balm in treating depression. According to an old Arabian proverb, “Balm makes the heart merry and joyful.” Swiss physician and alchemist Paracelsus (1493-1541) believed that lemon balm was an “elixir of life” and would increase strength and lengthen life. The last Prince of Wales, Prince Llewellyn, who lived in the 13th and 14th centuries, drank lemon balm tea every morning and lived to the ripe age of 108, justifying the herb’s description as an “elixir of life”.  Oxford scholars of the Middle Ages, drank lemon balm tea to refresh the brain and enhance memory and so it was called the “scholar herb”.

There are a few legends surrounding lemon balm, health and longevity, and royalty. Both King Charles V of France and Holy Roman Emperor Charles V are said to have consumed lemon balm beverages to promote health. Members of the Carmelite religious order created a concoction known as Carmelite water or Eau de Melisse de Carmes, which was believed to promote longevity and improve headaches and neuralgia. The primary ingredient in Carmelite water was lemon balm, but it also contained lemon peel, nutmeg and angelica root. A version known as Klostergau Melissengeist has been sold in Germany in recent times.

It is considered the herb of Compassion. Lemon Balm is bound to the Moon and to Water.  It is used in rituals associated with healing, health, friendship, love, and success.  Historically, it is a symbolic plant used to transmit messages between lovers. Carry Lemon Balm in a charm or sachet to find love, or burn it as incense. Drink as a tea to ease emotional pain after the break-up of a relationship or other personal hurt.  Soak leaves in wine for several hours, strain, then share the wine with the object of your affection to influence love.  When picking it invoke Diana. Cancerians do well with Lemon Balm.