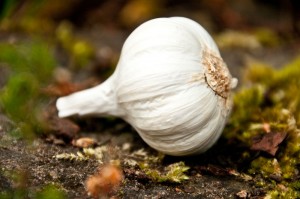 Garlic cloves can be eaten raw or cooked. They may also be dried or powdered and used in tablets and capsules. Raw garlic cloves can be used to make oils and liquid extracts. It is an essential ingredient in many cuisines around the world. It can be used raw in alioli and tapenade. It can be mashed into butter and used in garlic bread or bruschetta. Make slits in meat and insert slivers of garlic before roasting meats. Roast a whole bulb and eat with French bread as a dip. Delicious and good for you! To remove garlic odour from your hands rub them with lemon and salt.

Garlic Honey for Coughs: Peel and loosely crush 2 heads of garlic. Leave exposed to the air for 15 minutes to allow the active ingredient aliccin to be formed, then crush finely in a mortar and pestle. Mix into a small pot of runny honey and leave overnight. Stir in any juice on top before using. Take I teaspoon for coughs, colds or sore throats as needed. This can also be put into hot water or lemon water as a warming drink.

Garlic for colds: chop up 4 cloves of raw garlic and eat or use it as a garnish in soups etc.

Garlic and Thyme Chest Rub: for colds, catarrh, inflamed bronchial passages, chesty colds, flu and sore throats. Chop 4 garlic cloves well. Layer garlic and 75 g thyme in a jar until ¾ full. Pour 400 ml of olive oil over and seal. Place in a warm place for 14 days shaking daily.  Strain through muslin and store in a clean jar in a cool  dark place To turn it into an ointment put 300 ml of the infusion into a glass heatproof bowl with 25g of beeswax. Simmer over boiling water, stirring occasionally until the beeswax is melted. Cool and pour into clean jars before setting. Seal when set. This infusion or ointment can be rubbed in and will last for a year.

Garlic for toothache: Cut raw garlic and rub the cut edge on the tooth and gums a couple of times a day to stop toothache.

Garlic for warts: Take fresh garlic cloves and crush them, apply to warts until they disappear.

Garlic for bad breath: Crush a clove or two onto a dessert spoon then add olive oil and swallow. You get the benefits of raw garlic with none of the breath issues.

Garlic for herpes: Take a garlic clove and cut in half. Eat one half and take the other half and rub into the affected areas. (May sting a little ! )

Garlic for rashes: Use raw garlic juice on rashes and bug bites. It stops the itching immediately.

Garlic for tonsillitis: Peel a clove of garlic and cut them in half. Boil for a couple of minutes in about ½ cup water and add a pinch of salt, teaspoon of butter, a pinch of pepper and sprinkle with nutmeg.

Garlic for stomach: Cut a garlic clove into small pieces. Swallow them all in one go with a little water to cure bloating, stomach cramps and constipation.

Garlic for asthma: 10 drops of garlic juice with 2 teaspoon of honey cures asthma.

Its medicinal pedigree starts with Sumerian clay tablets dating from 2600BCE while Egyptian papyri list 22 therapeutic recipes including garlic. It helped with increasing stamina. Studies in Russia and Japan have found that in the body, garlic binds to heavy metals, including lead, cadmium and mercury aiding in their elimination from the body. Modern scientists in numerous clinical trials have concluded that it lowers cholesterol, lowers blood pressure, thins the blood (which reduces your risk of heart attack and stroke), and fights bacteria like an antibiotic. It is a potent antioxidant that has been found to inhibit tumour cell formation and is currently being studied by the National Cancer Institute. It may be effective in fighting stomach, skin and colon cancer.

Though it is best known as a culinary herb and vampire retardant, the medicinal benefits and claims have awarded it the name “Wonder Drug among all herbs.” Modern day research helps explain the broad applications of this “miracle” herb. The bulbs contain the amino acid allicin. When crushed, allicin is released. This chemical element is the component that gives its strong odour and is responsible for the powerful pharmacological properties of the plant.

One medium clove can equal the antibacterial action equivalent to 1% penicillin. It also contains about 0.5% of an oil, that is composed of sulphur-containing compounds. Its sulphur compounds, in addition to Selenium and Vitamins A and C containing compounds, make it a potent antioxidant, protecting cell membranes and DNA from damage and disease. Although it directly attacks bacteria and viruses, it also stimulates the body’s natural defences against foreign invaders.

It is reported to be more effective than penicillin against typhus disease, and works well against strep, staph bacteria, and the organisms responsible for cholera, dysentery and enteritis. It is generally regarded as a preventative measure for colds, flu and other infectious diseases. Furthermore, scientific studies have shown it stimulates the production of the liver’s own detoxifying enzymes which neutralize carcinogens and other environmental toxins. It has also been used to rid the body of intestinal parasites and to treat digestive infections.

Researchers have been studying the anti-cancer properties since the 1940’s. It appears that the herb may prevent cells from turning cancerous by enhancing the body’s mechanisms for removing toxic substances. Its phyto-chemicals are believed to enhance immunity and the National Cancer Institute (January 1992) reported that people who ate the greatest amount of onions and garlic had the lowest incidence of stomach cancer. Furthermore, it increases the activity of white blood cells and T-helper cells (natural killer cells), the cells that are central to the activity of the entire immune system.

Supplements can improve many of the processes that can lead to cardiovascular disease. It has been used as a blood thinner and anticoagulant to resolve blood clots and improve circulation. It has been shown to lower cholesterol while increasing the level of beneficial HDLs (high-density lipoproteins), the so-called good cholesterol. The plant has no side effects like those associated with cholesterol lowering drugs. In addition, its compounds gently lower blood pressure by slowing the production of the body’s own blood pressure raising hormones. At least seventeen clinical trials have shown that mild hypertension can be effectively managed with a garlic supplement.

It has great value as a long-term dietary supplement, helping to maintain healthy circulation, balance blood sugar and pressure, reduce fat levels in the blood, and improve resistance to infection. It can be taken with conventional antibiotics to support their action and ward off side effects. It has also been used in treating upper respiratory infections (especially bronchitis), late-onset diabetes, urinary infections, acne, asthma, sinusitis, arthritis, and ulcers.

Garlic has been used as both food and medicine in many cultures for thousands of years, dating at least as far back as when the Giza pyramids were built. Garlic is still grown in Egypt, but the Syrian variety is the kind most esteemed now. Garlic is mentioned in the Bible and the Talmud. Hippocrates, Galen, Pliny the Elder, and Dioscorides all mention the use of garlic for many conditions, including parasites, respiratory problems, poor digestion, and low energy. Its use in China was first mentioned in A.D. 510.

It was consumed by ancient Greek and Roman soldiers and sailors, and, according to Pliny the Elder, by the African peasantry. Galen eulogizes it as the “rustic’s theriacand.” Alexander Neckam, (a writer of the 12th century 1863), recommends it as a palliative for the heat of the sun in field labour. Garlic was rare in traditional English cuisine (though it is said to have been grown in England before 1548) and has been a much more common ingredient in Mediterranean Europe. Garlic was placed by the ancient Greeks on the piles of stones at crossroads, as a supper for Hecate. A similar practice of hanging garlic, lemon and red chilli at the door or in a shop to ward off potential evil is still very common in India.

According to Pliny, garlic and onions were invoked as deities by the Egyptians at the taking of oaths. The inhabitants of Pelusium, in Lower Egypt (who worshiped the onion), are said to have had an aversion to both onions and garlic as food. To prevent the plant from running to leaf, Pliny advised bending the stalk downward and covering with earth; seeding, he observes, may be prevented by twisting the stalk (by “seeding”, he most likely meant the development of small, less potent bulbs). Egyptian slaves were given a daily ration of garlic because it was believed to increase strength and endurance as well as prevent illness. Fifteen pounds of garlic would buy a healthy male slave during the reign of King Tut. According to legend a shortage of garlic led to the first known strike when the Egyptian slaves who were constructing the pyramids had their garlic ration cut.

Greek midwives used to hang garlic in birthing rooms to ward off evil spirits, and this custom eventually spread to most of Europe. Koreans used to eat pickled garlic before travelling through mountain passes in the belief that it would prevent tigers from attacking them.

Its most famous use is as a deterrent for vampires!  It has always been known as a powerful herb of endurance and good fortune. It protects you against drowning.  It has a quality of purification, i.e. washing the physical body with white light. It can now be used for cleansing of the external world through inner cleansing. It is linked to the Base chakra. One story shared by Muslims and Christians is that garlic sprang up where the Devils left foot stepped when he left the Garden of Eden. Hecate can be invoked when using it in magic.