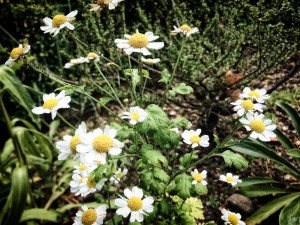 It is an aperient, is carminative, and is bitter. As a stimulant it is useful as an emmenagogue. The name is derived from “febrifuge,” as it was said to dispel fevers. Feverfew is also employed in hysterical complaints, nervousness and lowness of spirits, and is a general tonic. The cold infusion is made from 1oz of the herb to a pint of boiling water, allowed to cool, and taken frequently in doses of half a teacupful. A decoction with sugar or honey is said to be good for coughs, wheezing and difficult breathing.

The herb, bruised and heated, or fried with a little wine and oil, has been employed as a warm external application for wind and colic. A tincture made from Feverfew and applied locally immediately relieves the pain and swelling caused by bites of insects and vermin. It is said that if two teaspoonfuls of tincture are mixed with 1/2 pint of cold water, and all parts of the body likely to be exposed to the bites of insects are freely sponged with it, they will remain unassailable. A tincture of the leaves of the true Chamomile and of the German Chamomile will have the same effect. It is good for gas, bloating and worms. It is wonderful as a remedy for headaches and migraines. Planted round dwellings, it is said to purify the atmosphere and ward off disease. An infusion of the flowers, made with boiling water and allowed to become cold, will allay any distressing sensitiveness to pain in a highly nervous subject, and will afford relief to the face-ache or earache of a dyspeptic or rheumatic person.

Country people have long been accustomed to make curative uses of this herb, which grows abundantly throughout England. Gerard tells us that it may be used both in drinks, and bound on the wrists is of singular virtue against the ague.

Feverfew is one of the powerful protection herbs.  Worn around the neck or carried in a pocket or even in a purse or suitcase, it protects from sickness, injury, and accidents. It is bound to Venus and water.  In sachets, charms, and spells Feverfew can be combined with other like herbs to banish unwanted influences, to promote spiritual healing, and for meditation, relaxation, and love magick. Drunk as a tea, feverfew protects from colds, flu, and fevers.