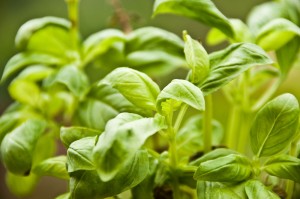 Basil flavours tomatoes, garlic and aubergines and makes pesto sauce. It flavours ratatouille, pizzas and pasta sauces. It does not dry well and should be added at the end of the cooking process. Sweet Basil grows to 2½ feet in height while Bush Basil grows to one foot in height. Both need full sunlight and a light to sandy, well-drained soil. It should be planted in late spring and harvested in early autumn. When planted next to tomato plants, it wards of the white fly. Basil is a versatile herb that may be used in an abundant variety of foods. It is excellent in tomato-based dishes, spinach, and all types of squash. It is great in soup but don’t add it until the last thirty minutes of cooking. This herb is very important in Thai, Laotian, and Vietnamese cooking.

Basil is widely known and used for its culinary attributes but not for its medicinal uses. While there are numerous types of the basil plant, we tend to use sweet basil and bush basil for cooking because of its palatable taste. Basil originated in India. It was considered a sacred herb. Basil is used to treat mainly digestive problems including constipation, stomach problems and flatulence. It has antidepressant, antiseptic and soothing properties. It can be rubbed onto insect bites and stings to relieve itching. It can be made into a cough syrup and used for coughs and colds.

According to Ayurvedic medicine, Holy Basil supports the management of diabetes due to its hypoglycemic effect. In ancient times Basil was used as an antidote for poison. It is also a herbal remedy for diseases related to the brain, heart, lungs, bladder, and kidneys. It is also mixed with borage to make a tea that is used to heighten vitality. Dried leaves are used in a snuff as a remedy for colds. Basil has also been used in cosmetics as a toning body rub when mixed with coarse sea salt oil.

Basil was first introduced to Europe in the 16th century. In India it was believed it would ward off misfortune and the herb was planted throughout their temple gardens. It is believed to be sacred to the God Vishnu. For much of its early history it was used as “funeral herb” and was placed on the corpse and scattered or planted on gravesites. Basil had a love/hate relationship among many cultures. It represented everything from hate and misfortune, to “love washed with tears”, and some even thought it was poisonous. It was also known in Egypt, Greece, and Rome. It was said that its name was derived from a mythical serpent creature – the basilisk. This creature was known to have killed with a look. The Greeks and Romans thought that shouting abuse at it encouraged it to grow. 16th Century Britain awarded it more positive virtues and considered it a sweet herb, using it in scented waters and even put it into nosegays.

In India, the herb Tulsi also called Holy Basil (sometimes spelled “Tulasi”) has been widely known for its health promoting and medicinal value for thousands of years. Commonly called sacred or holy basil, it is a principal herb of Ayurveda, the ancient traditional holistic health system of India. Holy basil is known as “The Incomparable One”, “The Mother Medicine of Nature”, and “The Queen of Herbs”. In reading ancient scriptures, we become aware of the utmost importance of herbal medicine for maintaining well-being, preventing disease, restoring health and prolonging life. In books written between 500 BC and 1200 AD, the plant Tulsi is continuously mentioned as one of the main pillars of herbal medicine.

In aromatherapy the essential oil can be used as a steam inhalation for decongesting colds. Pour boiling water over fresh cut leaves, inhale steam to clear sinuses and congestion. Homeopathy suggests Basil is an antidepressant and is thought to be emotionally uplifting when used in a bath. When rubbed into the skin it makes a wonderful insect repellent and if depressed a massage with this oil helps to relieve any anxiety. Basil’s anti-allergic effect makes this herb beneficial in the complementary natural remedy of hay fever and asthma. Scorpios have an affinity to Basil.