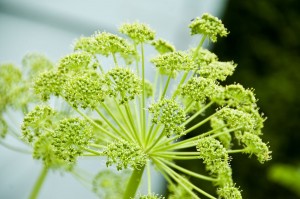 Leaves can be eaten raw or cooked. With a liquorice-like flavour,

they can be used as a flavouring in mixed salads. The stalks and

young shoots can also be eaten cooked or raw. The stalks should be

peeled and used rather like celery. They can also be used to sweeten

tart fruits and to make jam. Combined with rhubarb it sweetens

and reduces acidity. Ginger and Angelica makes a wonderful healthy,

delicious jam. They are often crystallised in sugar and used as sweets

and cake decorations. The stems are best harvested in the spring. An

flavouring. Roots should be cooked. Seeds and roots can be used as

a flavouring in liqueurs such as Chartreuse and Benedictine liqueurs

which are made by monks. A tea can be made from the leaves, seeds

or roots. The seeds can be used in biscuits.

Angelica has a long folk-history of use as a medicinal herb, in

particular for the treatment of digestive disorders and problems with

blood circulation. The root is the most active part medicinally. It

should be harvested in the autumn of its first year of growth, sliced

longitudinally if necessary and dried quickly. If well stored, the root

retains its medicinal virtues for many years. The leaves and seeds can

also be used. The leaves are harvested and dried in late spring before

the plant comes into flower.

expectorant, stomachic, a stimulant and a tonic. An infusion is used

to ease flatulence, indigestion, chronic bronchitis and typhus. It

treatment for Buerger’s disease, a condition that narrows the arteries

of the hands and feet.

Angelica is contra-indicated for people with a tendency towards

diabetes since its use can increase sugar levels in the urine. This plant

should not be prescribed for pregnant women, nor should the juice

be allowed to come into contact with the eyes. An essential oil from

the seeds is sometimes used as a rub to relieve rheumatic conditions.

It is sweet, pungent, warm and generally drying. It is a blood tonic

for anaemia and after childbirth. It has antispasmodic properties for

indigestion, stimulates appetite, is a digestive tonic and aids the liver.

For arthritis and rheumatism it is anti-inflammatory and antirheumatic.

products after childbirth or during a prolonged labour. (It is strongly

contra-indicated during the first 7 months of pregnancy). A poultice

of the leaves can be used to relieve sunburn but use with caution. It

is most effective in epidemics and is used to strengthen the heart.

Angelica is good for a sluggish liver and spleen.

Angelica Infusion – Place 1 tablespoon of the cut roots of either

minutes in a covered pot. Remove from heat and let stand, covered,

until the tea cools to room temperature. Drink the pint in 3 doses

Various species of Angelica have been used to quiet pain by

Sinensis) have been used in the same way, in the folk medicine of

Europe and China respectively. The Chinese species is sometimes

sold in North America under the names Dang Gui or Dong Quai.

(pain-relieving) properties. It is a master healer.

According to one legend, Angelica was revealed in a dream to a

or Archangel). All parts of the plant were believed effective against

evil spirits and witchcraft. It was held in such esteem that it was

called ‘The Root of the Holy Ghost.’ In America it was used by the

Iroquois and other tribes as Witchcraft Medicine. An infusion of

smashed roots was used as a wash to remove ghosts from the home.

Archangel Michael. It can be used in a purifying bath. According

to Culpepper “It resists poison by comforting the heart, blood and

It is connected to both Archangel Michael and Archangel Gabriel.

Energetically it anchors the Celestial Guardian, or Guardian Angel,

centre. It links the Root and Sacral chakras to the Throat centre,

helping us to speak our truth within interpersonal relationships with

the energy of love.

As a Master Protector, Angelica transforms negative energy. It may

be worn as an amulet or burned as incense. Leos have good luck

with Angelica. Use it when you wear white and invoke Venus, The

Goddess of Love to help with intimate relationships.