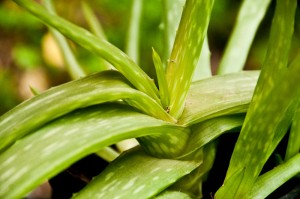 Aloe Vera works primarily in two main areas. The first includes surfaces and membranes, such as the skin and the lining of the sinuses, nose, throat, stomach and bowel, together with the linings of the lungs and genital tract.  Secondly, it works on the immune system, which is designed to protect the body from attack by external aggressors such as bacteria, viruses and fungi, as well as internal threats from other enemies such as cancer cells.

It is bland, a bit salty, cool, moist, restorative, softening. It moistens dryness, relieves irritation, reduces inflammation and infection, promotes tissue repair, benefits the skin and stops bleeding (burns, all skin injuries, ulcers) plus it boosts the immune system. It also resolves mucous, damp conditions and relieves congestion, (e.g. damp cold, sinus and nasal congestion, bronchitis). It contains about 95% water. Externally it promotes the healing of all wounds, burns, eczema and skin problems. The rest contains active ingredients including essential oil, amino acids, minerals, vitamins, enzymes and glycol-proteins. Herbalists have used it since the 1930’s as a staple treatment. Many liquid solutions are made, some adding the juice with other plants and herbs. The juice is comforting to digestive tract irritations, such as colitis and peptic ulcers. As a supplement, it is said to help digestion, blood and lymphatic circulation, and kidney, liver and gall bladder functions.

Aloe Vera Gel contains at least 75 known ingredients which can be divided into the following groups;

Vitamins – it contains a wide range, but the most important ones are the antioxidant Vitamins C and E and Beta-Carotene, the precursor of Vitamin A. It is also one of the few plants in the world to contain Vitamin B12.

Amino Acids – the human body requires 22 amino acids, the building blocks of proteins, and Aloe Vera gel provides 20 of them. More importantly, it provides 7 of the 8 essential amino acids that cannot be manufactured by the body and which therefore have to be consumed as food.

Sugars – these include the important long chain polysaccharides which act on the immune system to boost its effects.

Enzymes – lipases and proteases which break down food and aid digestion as well as  carbooxypepitdase which is involved in the inflammatory process.

Saponins – these are soapy substances which exert a powerful anti-microbial effect against bacteria, viruses, fungi and yeasts such as candida or “thrush”.

Lignin – this woody substance bestows on Aloe Vera its penetrative ability to reach deep into the skin.

Anthraquinones – the most important ones being aloin and emodin, but altogether they are strong painkillers, and are acknowledged to possess anti-bacterial and viruscidal activity.

Salycylic Acid – this aspirin-like compound is anti-inflammatory and topically helps to break down dead tissue. It works by providing a rich cocktail of nutritional elements whose combined action and balance produce a more powerful effect together than would be expected from the addition of the individual components. This is because they work as a team, enhancing each other’s effect – known as synergism. It also has adaptogenic properties, which means it is a substance which increases non-specific resistance of an organism to adverse influences such as infection or stress.

Aloe contains three anti-inflammatory fatty acids that are helpful for the stomach, small intestine and colon. It naturally alkalizes digestive juices to prevent over acidity – a common cause of indigestion. Aloe also helps clean the digestive tract by exerting a soothing, balancing effect and has a gentle laxative effect. Cosmetic companies use it also. It is a master healer.

Aloe is native to the Africa continent and is also known as “lily of the desert”, the “plant of immortality”, and the “medicine plant”. The name was originated from the Arabic word alloeh, meaning “bitter”, because of the bitter liquid found in the leaves. Around 1500 B.C., the Egyptians were known to use the herbal plant for treating burns, infections and parasites. They also used it as an embalming agent. Apparently Aristotle tried to persuade Alexander the Great to conquer the island of Socotra for its aloes as it was the only known place that grew them at the time. The plant was introduced to Europe in the 10th century. Apparently it was an important part of Cleopatra’s beauty regime.

No plant works its medicinal magic so obviously and quickly as the soothing aloe. It cleanses, solidifies and purifies the ethereal body, hence the strong liver focus. It links to the Solar Plexus and Sacral chakras and the 3rd ray. It is associated with the Virgin Mary and thus has protecting qualities. The Gospel of John mentions aloe as being used to embalm Jesus. The aloe teaches us patience, for although it is long lived it blooms only once. Any rituals using aloe should be performed when the moon is full.